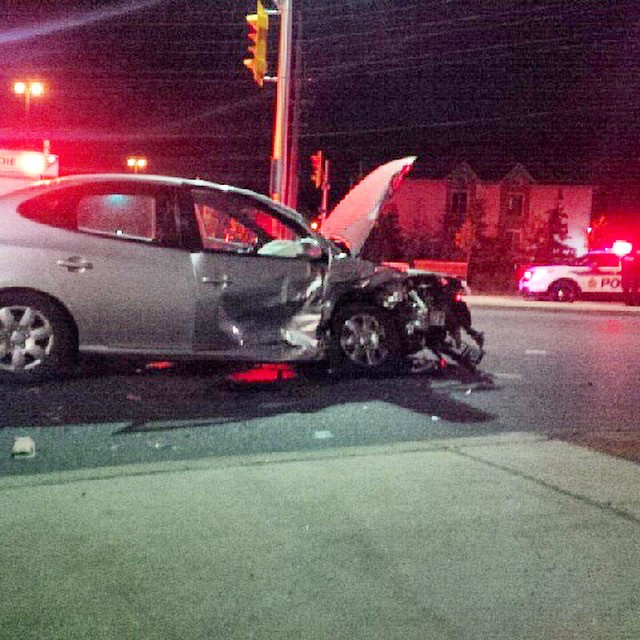 In 2013 I was in a car accident on my way to a hockey game in Ottawa. My car spun a bunch, and my head broke straight through the driver’s side door window.

On the surface, I was very lucky. No severe bone breaks, just a bunch of bruises, some broken glass, and a headache.

After a few subsequent hockey-related concussions, the “headache” would never leave me.

I couldn’t sleep, lights and sounds of all kinds drove me insane. More terrifying though was that I began to hear voices in my head, and had panic attacks daily. I felt like I was going crazy and as far as I knew, I was.

Time passed and things changed. While the physical symptoms slowly improved, the mental ones just kept on getting worse – and I had no idea what to do. My brain was f*cked, but I had no way of proving it or showing it to other people.

As years went on, virtually every doctor would give me their own version of, “The brain is a funny thing, and it just needs time.”

One night a few years ago I was driving on the highway in Burlington planning how I was going to drive into oncoming traffic. I’d been living like this for years and felt like I was going crazier and crazier every day. I would wake up in the morning and go to bed at night in a fog. Nothing could make me happy, and on top of everything else – my cognitive functioning was decreasing to the point t where I couldn’t even remember the way home.

I made a deal with myself though. I’d drive to the hospital and if they couldn’t help me or give me some sliver of hope, I’d do it.

Since driving to the ER that night, I’ve been on all different combinations of drugs and done all sorts of therapies. I’ve seen psychiatrists, psychologists, therapists. I’ve taken anti-depressants, anti-psychotics, stimulants, and learned meditation and yoga.

Nothing happened overnight, and yet everything changed in an instant. I discovered what I needed to start to rebuild my life, and all it was was the right person empowering me to believe that it was possible.

I’m not out of the woods, and truthfully, I don’t think I ever will be. “It” didn’t get better, I got better at dealing with “it”. I’m thankful for all of the sh*t that I’ve gone through because, without it, I wouldn’t be half the man I’m proud to be today.

I feel incredibly fortunate to be able to do the work that I do today. In my speaking/coaching practice, I teach what it means to lead through the lens of humanity, and I get to empower others to climb out of whatever hole they may be in, no different than someone did for me.

To anyone out there who is struggling with something. Whether it be mental health, addiction, or anything at all.

I see you, and I’m rooting for you. I’m in your corner now, and tomorrow.

You’ve f*cking got this.

Next PostIf you’re trying to get the most out of your people, you’re doing it wrongNext
Menu
Facebook-f Instagram Twitter Linkedin-in
Menu
Menu
© 2022 Jarryd Ross Creative, Inc.